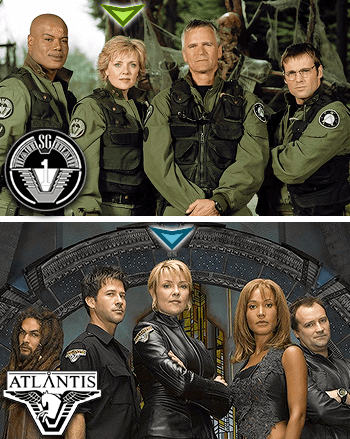 Sam Carter is a force to be reckoned with in both galaxies.
Advertisement:

When a character leaves one show to join the cast of another (often because the original show has ended). Basically a permanent crossover.

Sometimes a character's Spin-Off gets canned. When this happens, they'll often transplant back to their show of origin, with some flimsy explanation; if this happens, the chances of a Fully Absorbed Finale go way up. Also, a Late Spin-Off Transplant occurs when a character doesn't move to a spinoff until some time later. See also Rogues Gallery Transplant, a more specific variant of this trope where a villain from a superhero's Rogues Gallery shifts to fighting someone else. Compare Canon Immigrant and Canon Welding. Not to be confused with the wiki operation that is also called a Trope Transplant.

Unrelated to Billy Needs an Organ and Walking Transplant, which are about biological transplants.

Not to be confused with the ska punk Super Group, Transplants.