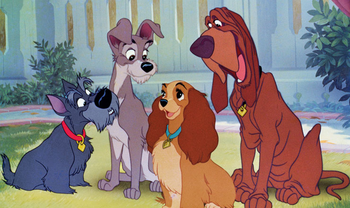 And several in the same movie, even!
Advertisement:

Often, animation writers use a dog's breed to determine its personality by making it a kind of voiced ethnic or nationality stereotype, especially if the name of the breed has a country in it. This has little to do with how the breed really acts, as anyone who has dogs will attest.

Cat Stereotype is the species counterpart of this (though it usually has more to do with color than breed).

Alternative Title(s): All Bitches Are Poodles