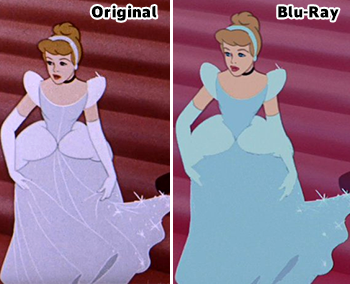 This is what really happens if you stay out past midnight.
Ah, digital restoration and remastering—a wonderful thing, really. It cleans up the picture quality, restores faded colors, gets the hisses and pops out of the soundtrack, but it's an expensive, time-consuming process. It's expensive, takes a long time, requires careful attention and care... and did we mention it was expensive?
Advertisement:

Digital destruction is often the result of people in general having the tendency to want to just get the stuff out as quickly as possible, all with a "digitally restored/digitally remastered" label stamped on it to maximize profits. Or worse, they didn't even know what harm they were doing to begin with; often the available tech is deceptively difficult to get good results from. As anyone who actually understands digital image processing will tell you, things like noise reduction and grain removal are actually really hard to do without at least some loss of detail (which can range from subtle to distractingly obvious), to the extent where preserving film grain is almost universally considered the better option among videophiles.note At least in the west; in Japan, audiences tend to prefer removing the grain to "modernize" the visuals, to the extent where preserving it is bound to result in massive backlash over there, thus resulting in grain removal being a very common move in anime remasters.

(fuzzy electrical patterns scattering around an image or drawing), increasing the contrast, overzealous grain-smoothing that unintentionally gives the picture a smudgy, synthetic appearance, cropping 4:3 content to 16:9 and losing important parts of the image, etc. Animation tends to be a particularly big victim of this when it does happen, largely because the reliance on fine details in both lineart and backgrounds lends to automatic processes very frequently mistaking these details for dirt and wiping them off.

All the same, stuff like this happens a lot with restored older films and especially older cartoons... and on occasion, this even happens (or happened) to newer cartoons (as mentioned by Ed, Edd n Eddy creator Danny Antonucci here

). It even happens to the popular ones, such as those from Disney!

This happens with digital remasters of music as well. The most commonly known phenomenon is mastering at the volume levels of modern music, creating excess limiting and distortion that sacrifice the cleanliness, clarity and overall dynamics of the sound, but there are plenty of other destructive practices used as well. These include drastic alterations of the frequency equalizationnote (you know, stuff like bass, treble, mid-range and all those things you change with a graphic EQ) that don't suit the source material, excessive noise reduction that sucks much of the detail and life out of the recording (basically the audio equivalent of excess grain removal), and overuse of synthesized harmonicsnote (used primarily to emulate low and high frequency reproduction that wasn't possible with the original equipment) which replace the organic feel of the original recording with a cold, mechanical one.

Naturally, this is a great source of contempt for collectors, purists, and even the common customer alike (the ones that are savvy enough to be aware of it, anyways). It's the total opposite of a "great" restoration, in a nutshell.

The Trope Namer is this article

from John Kricfalusi's blog, in which he feels the restorations of old cartoons are actually ruining them, rather than making them better. (The specific issues he complains about result from over-zealous application of certain adjustments, namely color saturation and sharpening.)

Compare Remaster. For the video game equivalent of this trope, see Porting Disaster. For the musical equivalent, see Loudness War. May also tie into Bad Export for You. In particularly bad instances of this, to preserve the way the footage originally looked you gotta Keep Circulating the Tapes. Also see Visual Compression, George Lucas Altered Version.

Film — Live-Action
Live-Action TV
Literature
Music
Video Games
Web Animation
Western Animation
It bears noting that DVNR (Digital Video Noise Reduction) line damage is a very common problem among cartoon DVD releases. The reason for this is because the program was designed to remove scratches and dirt from older films by comparing adjacent frames and taking elements from another frame to remove damage. While this usually works fine for a live-action film (although it likewise can cause motion smearing and picture damage if used carelessly), in animation (especially animation shot on ones, or one new drawing per frame) the DVNR process can easily mistake details or linework as dirt or scratches, and can accidentally delete whole details from the drawings as a result if the process isn't properly used. Grain Smoothing is also considered to be a serious liability to use in restoring old cartoons, since it can likewise snuff out details or linework if used carelessly. Another reason DVNR is so often (ab)used is because its an automated process, and is much cheaper and quicker to use than DRS (Digital Restoration Services), which require going through the film frame by frame to clean them up at great expense and time.
Feedback

Phelous compares the footage of Britannica's Rapunzel, and finds that the VHS version is actually of higher quality than the DVD.

Phelous compares the footage of Britannica's Rapunzel, and finds that the VHS version is actually of higher quality than the DVD.