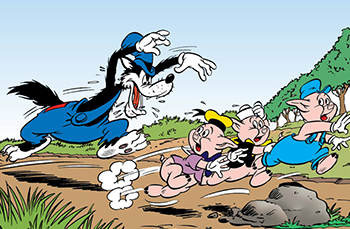 When the Big Bad Wolf appears in works of fiction, there are some common themes included, such as his predation on children, pigs and innocent young women in red, his knack for disguising himself (used to fool Little Red Riding Hood), and his powerful lungs (used to destroy the two of the Three Little Pigs' houses). Adult-oriented fairytale retellings since the seventies or so have developed a tradition in which he is often either a werewolf or a wolfwere (a wolf who turns into a human). He's also been known to appear in sheep's clothing.

This character is a common target of Alternative Character Interpretation, so when adding an example, please specify how the Big Bad Wolf is portrayed.

The character is usually a savage wolf, but please note that the character doesn't have to be a genuine wolf to fit this trope. Those are traditional characteristics of the character, but Alternative Character Interpretation can go quite far. Not to be confused with a Big Bad who's a wolf, though sometimes they are, or with Bad Wolf (although that name is inspired by this character, as mentioned among the examples).