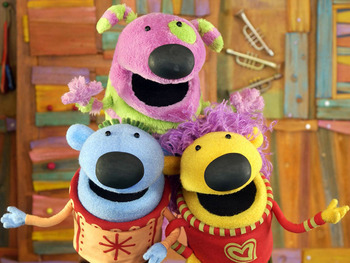 Jaaack, you don't have much time. We have to leave soon for your wiki editing lessons!note From left to right: Mel, Jack, and Mary.
"Hello, everybody! It's me, Jack! Welcome to my backyard clubhouse. Say, are you ready for some music and fun?"
— Jack's Opening Narration in the "Do It Yourself" Theme Tune
Advertisement:

The show follows the adventures of the cool music-loving kid Jack, who takes a break from his busy schedule to visit his backyard clubhouse. There he makes music, sings, dances, and has fun with his friend Mary who plays the accordian, and his faithful drum-playing dog Mel.

Each episode featured Music Videos from Move to the Music's Laurie Berkner, as well as other musicians who dropped by the clubhouse.

"There's just one more thing we want you to know...
You're always welcome on Jack's Big Music Show!"