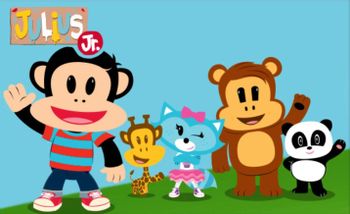 Based on the work of Paul Frank, Julius Jr. is a show produced by Saban Brands (yes, that Saban Brands), who now owns the Paul Frank brand, and backed by Fisher-Price. The stories follows Julius and his friends Clancy the giraffe, Worry Bear, Sheree the raccoon and Ping the panda in their day to day adventures, the problem that they face, and the steps they take to resolve it.

The show airs on Nick Jr. in the U.S, with merchandise being pumped out regularly by Fisher-Price. While it is currently not known to be airing outside the U.S, it is available for streaming on Netflix, which began going global in January 2016. Even if you don't have Netflix, the series is also getting a steady stream of DVD releases and viewers in the U.S can also watch full episodes off the Nick Jr. Website.