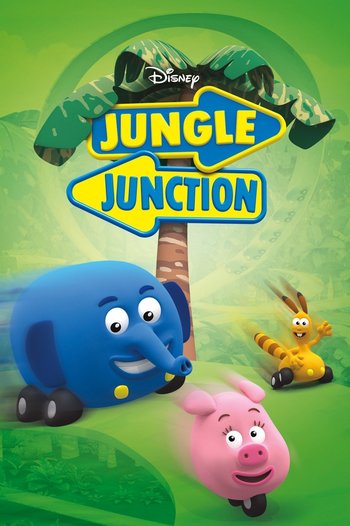 Jungle Junction is a UK-produced CGI animated children's show that began airing in the United States and parts of Europe in 2009. It features anthropomorphic animals "with wheels instead of feet" who cruise around a hidden jungle with its own town square and highway system. Like other shows on the Disney Channel's weekday morning Playhouse Disney (now Disney Junior) segment, it is aimed at younger viewers and includes portions in which the characters ask the viewing audience to help them solve a simple problem. An example would be, "which road takes me to the waterfall? ... The one marked by a sign with a picture of a waterfall on it? Yes, of course!"

As should probably be expected, there is no elaborate storyline to this show, and a new viewer does not need to know anything about the characters or setting beyond what is explained in the theme song. The animal-cars simply spend each episode cruising through the jungle, discovering new things and solving random problems they encounter along the way. In one episode, they find a special tree with a tap on it that produces bouncy balls, then forget to turn the tap off in their excitement, and must fight their way back up the now ball-covered road to fix their mistake. Sometimes these episodes include an Aesop — in this case, a statement on conservation, as the bouncy ball tree wilts from overuse — but more often than not, they just highlight the importance of friendship and working together.

The characters who are most frequently seen include: