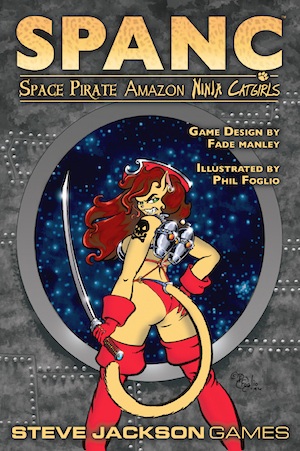 SPANC: Space Pirate Amazon Ninja Catgirls is a card game from Steve Jackson Games illustrated by Phil Foglio for two to four players, who each control a crew of, well, Space Pirate Amazon Ninja Catgirls. The object of the game is to be the first crew to collect 10 Loot tokens and/or Poolboy cards. ("Poolboys are of no practical use, aside from housekeeping and footrubs, but they are very good for their owners' morale" says the manual.) The stereotypes of pool boys and other things makes it easier to figure out what they're used for.

The crew is made up of four CatGirls, determined by randomly dealt Crew Cards. Each Cat Girl has four skill ratings on her card: Space Pirate, Amazon, Ninja, and Cat Girl skills (bet you didn't see that coming). Play consists of a series of "Capers," each of which is made up of four challenges from the Challenge Cards. Each crew takes turns attempting the challenges, rolling against the appropriate skill on the Catgirl's card. Some cards add bonuses or penalties to the skill roll. Bonuses can also be applied to the roll if the Catgirl has a Toy Card, or can trade with someone who has an applicable Toy Card. Winning the challenge lets you take Loot tokens and/or Toy Cards.

There are optional rules for Catfights if more than one crew completes all four challenges. Between capers, the crew gets to trade Toy Cards or buy more from the deck with their Loot. Some of the challenges that must be tackled include Locked Vault, Laser Beams of Doom, Ball of Yarn, Catnip Farm, Friendly Guard Puppies, Stuck Airlock, Holiday Crowds, Chinese Finger Trap, Anti-Ninja Spray, and of course fighting off Teenage Boys.