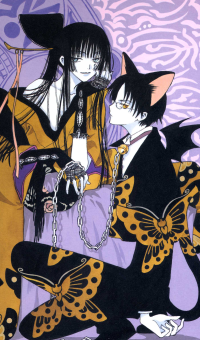 Oh, yeah. Real subtle.
Delenn: You can look up, Lennier of the Third Fane of Chudomo.
Lennier: It is forbidden.
Delenn: I can't have an aide who won't look up. You'll forever be walking into things.
— Babylon 5
Advertisement:

The archetype of a young man kept under the heel of his typically older female employer. Usually she takes a certain amount of pleasure from teasing him, asking him to get coffee, giving him Prank Punishments for misdemeanors, and generally watching him squirm. The fact that she's often The Wonka means that he usually rolls his eyes at her exploits, but nonetheless follows her diligently, so there's often overlap with Beleaguered Assistant.

Despite this, the woman usually does genuinely care about the boy, she just shows it in a very strange way. She's often a grown-up Tsundere or a Defrosting Ice Queen and may act the way she does because she has trouble showing affection. Hypocritical Heartwarming is likely to occur at some point if someone else decides to mess with the boy instead of her.

Compare Lady and Knight which is more about the guy protecting his lady/mistress than serving but overlap is possible. A major difference is the knight will usually choose to serve the lady out of love, chivalry, duty, etc while the servant boy is more likely to be hired or indentured.

Compare and contrast Pizza Boy Special Delivery, Cheating with the Milkman, and Sleeping with the Boss, for when the relationship is primarily sexual.

Also see Subordinate Excuse for when more personal reasons are involved in their working relationship.