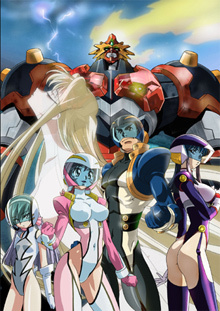 Godannar is an anime series directed by Yasuchika Nagaoka and animated by AIC and OLM Incorporated. It premiered on AT-X on October 1, 2003, and the series consists of 26 episodes spread across two seasons.

In 2042, Earth was under attack from an alien force called the "Mimetic Beasts". They carry the Insania Virus, which usually targets males and mutates them into monstrosities. The Hero, Goh Saruwatari (Takayuki Kondo), along with his partner Mira Ackerman (Aya Hisakawa), pilots the Humongous Mecha pair Dannar and Okusaer and led the final battle against the Hive Queen of the Mimetic Beasts, driving it away at the cost of Mira's life, but in the same time, Goh saved a young girl named Anna Aoi (Mai Nakahara), the daughter of his superior Kiriko Aoi (Takako Honda). Attempting to get over Mira's death (whom he actually loved), Goh decided to move on and...proposed to Anna, despite the age gap (Anna's still a high school girl, Goh is...well, someone that would be of a tenured salaryman).

Flash forward 20 Minutes into the Future.

Five years later, all's set for Goh and Anna to get married. Anna already confirms her vow, but right before Goh can declare his...he gets an urgent call that the Mimetic Beasts are back and he needs to go pilot the Dannar and quell them again, thus forcing him to delay stating the vow to Anna. Frustrated, she tries to follow Goh, only to find the Neo Okusaer, sealed after Mira's death. Anna goes on to pilot it (since she's somehow a master of a similar riding game) and helps Goh, and thus their life as a newlywed couple and Humongous Mecha pilot commence. Their two mechs can even combine into the mighty Godannar, complete with a final attack that requires both of them working in tandem to pull off.

This show is notorious for the amount of fanservice presented, especially gainaxing. At the same time, it's unique in that it combines over-the-top super robot action with, of all things, a nice dose of Character Development: more exactly, an examination of marriage, as Goh and Anna face difficulties both on the battlefield and in their relationship.