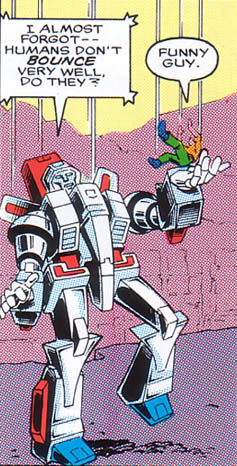 Good of Jetfire to notice.
"Don't worry, Optimus was using his soft legs to try and catch Sam and Mikayla."
— Jeremy (on Transformers), CinemaSins
Advertisement:

In general, the hand of a Humongous Mecha would not really be safe for a human to fall on, what with them being made of metal and all.

That doesn't stop heroic souls from striving to save innocent people who get caught in the crossfire and end up falling off a building. What's more, it doesn't stop that heroic act from working in the first place!

Usually, falling on metal from a great height would be as bad as falling on anything from a great height. At the absolute best, getting caught by a giant robot should just subtract the robot's height from the total distance the person is falling, which is only useful if falling off something barely taller than the robot itself. But Humongous Mecha seems to throw that element of momentum out the window. For the best, perhaps - the rate of Heroic BSODs would probably skyrocket if would-be heroes had to spend their time cleaning the bodies of innocent women and children off of their robot's hands.

Note that this could work if the robot hand in question moved downward a ways, to gradually slow the person's fall—but this is almost never the way it's portrayed.

In (the highly unusual) case the person to be saved dies from coming in contact with the robot's hand, it's often a And Call Him "George"! moment.

A subtrope of Not the Fall That Kills You….