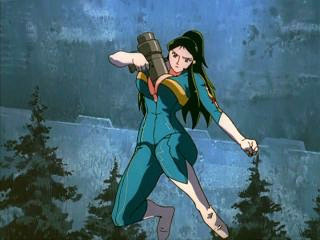 So that's where she gets all those wonderful toys!
"Women have more hiding places than men."
— Meryl Silverburgh, Metal Gear Solid
Advertisement:

A woman hides a plot-sensitive item close to her heart — or more accurately, between her (usually large) breasts. Related to the Double Standard, since a man can't reach down there without hilarity ensuing (consequently, women often stuff a small object down there to keep a man from getting at it). May lead to being Nipple and Dimed. Occasionally serves as Hammerspace. Lends a whole new meaning to the term "breast pocket". Does not refer to the, uh, other compartment or other other compartment.

Occasionally even small pets get stored there (well, it's warmer than a shoulder). Such cleavage critters are usually harmlessly cute; if they're longer than they are wide, you can bet they're going to be used for blatant fanservice sooner or later. Under certain circumstances, humans can get a ride there too — an extreme variation of Marshmallow Hell for extra Fanservice and Ship Tease.

If an antagonist knows she's hidden something valuable there and has her in his power, this can result in a Shameful Strip or Pervy Patdown to try to reveal the object. Otherwise, it's the Mundane Utility of the Most Common Superpower.

This is one of several trope names that could be a "Before & After" puzzle on Wheel of Fortune.note In fact, it was used on the actual show. Or, on the Game Show Chain Reaction: Victoria's / Secret / Compartment / Door / Stop / Short / Story / Time.