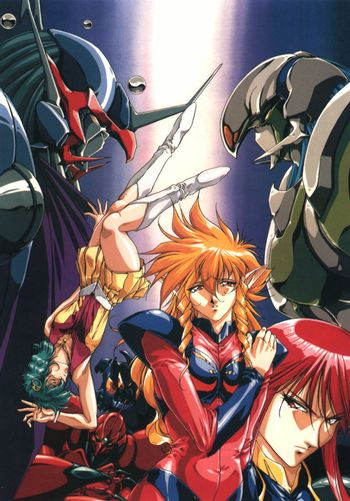 The Iczer series is a group of three OVA series directed by Toshiki Hirano note at the time of this series' production, he was going by his real name, Toshihiro Hirano, but later started going by his current stage name: Fight! Iczer-One (3 episodes, 1985-7), Adventure! Iczer-3 (6 episodes, 1992 — The US DVD release was retitled Iczer Reborn) , and Iczer Girl Iczelion (2 episodes, 1995). There are also the manga Golden Warrior Iczer-One and Legend of Iczers, and the Dangaioh vs Iczer-One audio drama. Fight! Iczer-One and Iczer-3 appear in Super Robot Wars L for the Nintendo DS.

In the first series, Fight! Iczer-One, when the Earth is invaded by the otherworldly android, Big Gold, and her/its fleet of mysterious female aliens called the Cthulhu (or Cthuwulf, in some translations), the being called Iczer-1 arrives to fight them. To do this, she must find a synchronisation partner among the humans. The partner, Nagisa Kano, is someone who has been particularly traumatised by the events of the invasion, and Iczer-One must persuade her to aid against the alien menace.

In the second series, Iczer-3, Iczer-One has been hunting down the spawn of Big Gold. When she is wounded in battle against the most powerful of these, Neos Gold, Neos launches an invasion of Earth, and Iczer-One is forced to send her younger sister, Iczer-3, to stop her, alongside a descendant of Nagisa Kano.

In Iczelion, Chaos and his sister Cross, two more of Big Gold's spawn, invade. This time, Iczels, androids with the ability to synchronise with humans, are sent to help defend the Earth, and one of the recipients is another version of Nagisa.

Blending elements of Tokusatsu, Horror, and Yuri, Fight! Iczer-One is a dark, mature story that was quite popular at the time of release. It retains a small but dedicated fanbase in both Japan and the west, and is, for a surprising number of older anime fans, one of the first anime series they had seen. The sequels are Lighter and Softer, concentrating more on action, although the horror elements from the original don't entirely disappear.