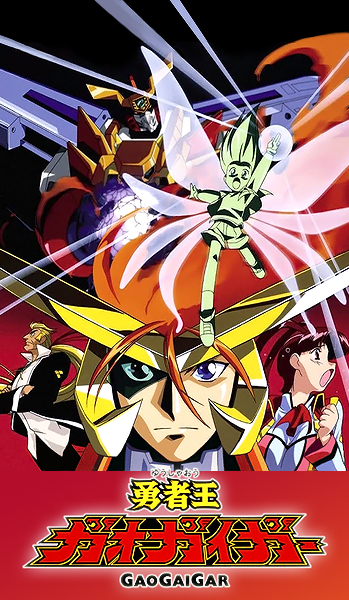 This is the story of the Brave men and women note  and robots! who fight to save the human race!
I'll show you... the power of true courage!
— "Cyborg" Gai Shishioh
Advertisement:

The King of Braves GaoGaiGar (勇者王ガオガイガー / Yuusha-Oh GaoGaiGar) started broadcast in 1997, as the final installment of the Takara/Sunrise Brave Series.

In the most patently awesome version of the Delivery Stork trope ever, a giant robot lion delivers a human-looking baby to an unsuspecting couple in the middle of a snowstorm, who name the baby Mamoru. Eight years later, in the far flung future of 2005, Mamoru is on a school trip to a garbage island in order to have demonstrated to him the importance of recycling, only to awaken a giant Robeast. He and his classmates are trapped on said robot, and all hope seems lost as the military bombards it with fighter jets, only to have them shot out of the sky. But what's this? A mysterious cyborg swoops in to save them, then jumps into the giant robot lion from eight years ago, turning it into a large robot man. When this proves not enough to save the kids, he fuses it with a bullet train, stealth bomber and drill tank and basically rips its heart out. Just as he's about to crush it however, Mamoru suddenly starts to glow green, wings of light spread from his back, and he flies towards the robot, begging the robot not to destroy the core.

Thus goes the first episode of GaoGaiGar, an anime made in the aftermath of Neon Genesis Evangelion that continued the Hot-Blooded spirit of the Brave Series, gleefully revisiting the old-school Super Robot style of Giant Robot Combining Mecha made up of all manner of animals and vehicles that launch brute-force attacks while declaring each one by name with all the straight-faced seriousness of its Darker and Edgier contemporaries in the Mecha Show genre. The first 26 episodes are Monster of the Week action - someone gets turned into a Zonder, they attack the city, GGG launches to fight it. New technologies and characters get introduced at a constant rate and you get the occasional glimpse of what's to come. Then, after the half-way point all hell breaks loose and GGG have to try twice as hard as they were just to stay alive. Courage, friendship and sacrifice, it's everything a growing boy needs. The show was later dubbed by Media Busters, however only half of the episodes were dubbed in English and the other episodes were released subbed on DVD.

It proved so popular with the Periphery Demographic that it received a Darker and Edgier OVA called The King of Braves GaoGaiGar: FINAL, which elevated the sheer Over-The-Top-itude several times over, as well as providing a lot more explicit Fanservice. FINAL would later be edited into The King of Braves GaoGaiGar: FINAL Grand Glorious Gathering, a thirteen-episode television version of FINAL made to strengthen the series' ties to sister-show Betterman and promote the upcoming next installment of the Brave Corps series, which would have been a sequel to FINAL.

Unfortunately by this time, interest in the franchise had waned significantly, and the sequel never came to pass. Another sequel,

codenamed Project Z, was also ultimately dropped due to said lack of interest. In September 2016, Sunrise formed a light novel publishing branch called "Yatate Bunko", with one of the projects released alongside it being The King of Kings: GaoGaiGar vs. Betterman, a novelized version of Project Z that would go on to have a Comic-Book Adaptation and become one of the storylines in Super Robot Wars 30.

The series has also continued to have various merchandise even decades after going off the air, with Kotobukiya designed Cross Frame Girl gijinka of GaoGaiGar and D-Style Super-Deformed versions of the suit, Bandai Candy Toys releasing numerous models of robots from the series starting in 2017, and the Bandai Spirits model kit division creating GaoGaiGar and GoldyMarg kits in their premier Real Grade line for the series' 25th anniversary.

Compare to Gunbuster, Diebuster, Mobile Fighter G Gundam, and Tengen Toppa Gurren Lagann for more examples of COURAGE AND GUTS! Be sure to also visit GoLion and Voltes V who could very much be GaoGaiGar's spiritual grandparents.

Now also has an under construction character sheet.

A hammer so large, it requires another mech to be used as a glove just to be used safely. Oh, and it disintegrates its target into photons.

Example of:
Drop the Hammer

A hammer so large, it requires another mech to be used as a glove just to be used safely. Oh, and it disintegrates its target into photons.