Becoming Part of the Image 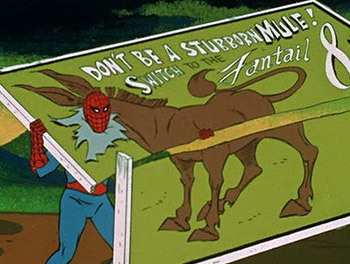 A person gets his head stuck in a painting, billboard, poster or other sort of image, in such a way that his head perfectly fits into, or otherwise seems to be part of, the image on this painting, often with humorous results (usually, it will be a character's head coming out of a horse's ass or a male character being put on a portrait of a nude or scantily-clad woman).

Not to be confused with a Phantom-Zone Picture. Compare Portrait Painting Peephole (a person looks through eyeholes in a picture) and Stand-In Portrait (the entire image is actually a person).

"Pink is DEFINITELY his color!"

"Pink is DEFINITELY his color!"