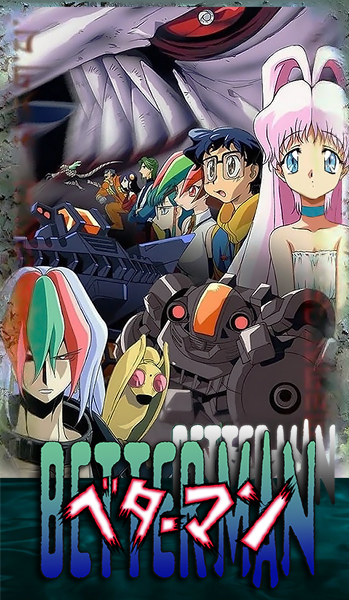 Ordinary High-School Student Keita Aono falls into the cockpit of a Humongous Mecha, co-piloted by his childhood friend, Hinoki Sai. After getting beaten up by a giant animatronic fish-man, our heroes are saved by a shapeshifting Bishounen called Betterman. Jungian symbolism, Fanservice, and Body Horror ensue. The anime consists of 26 episodes. It was aired in Japan on TV Tokyo from April 1, 1999 to September 30, 1999. The series made its North American debut on G4TV's (then Tech TV) Anime Unleashed block on December 30, 2002.

On par with Neon Genesis Evangelion as the darkest mecha anime of the 1990s. It shares a universe (courtesy of sharing a lot of production staff) with GaoGaiGar, despite the two being very, very different. In fact, it got a light novel crossover with GaoGaiGar that pits the two against each other, King of Kings: GaoGaiGar vs. Betterman.

Not to be confused with Pearl Jam's song, "Better Man."