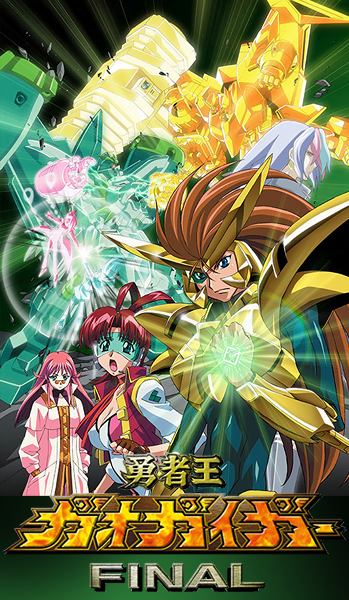 Together with the oath sworn through courage!
Advertisement:

Following the Gutsy Galaxy Guard's victory over the Zonder and the 31 Primevals, a new threat makes their appearance on Earth. GGG headquarters—with Guy Shishioh and the newly-constructed GaoFighGar—teams up with GGG France: Chasseur to battle the evil organization Bionet.

Among Chasseur's ranks is Guy's cousin, Renais Cardiff Shishioh—a former Bionet cyborg with the relentless pursuit of destroying those who took away her humanity. But after a battle with Bionet, GGG's military stations around the world are suddenly attacked, and the recently-discovered "Q Machine Parts" and the original Gao Machines are stolen by Mamoru Amami, who has been abducted and cloned by an even greater threat known as the "Eleven Masters of Sol."

Evicted from Earth by the United Nations, GGG must now travel to the far reaches of the galaxy to battle the Sol Masters and save the universe before it's too late.

This is the end of the tale of the brave king who transcends fate...