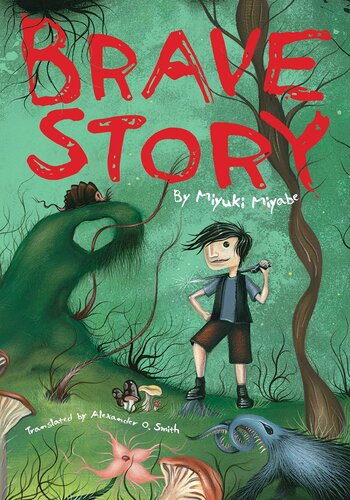 Wataru is a fairly ordinary 11-year-old boy living in Japan. He lives with his mother and father in an apartment complex, goes to cram school, tries to impress the new kid in his class, avoids bullies, obsesses over video games coming out, hangs out with his best friend—nothing big or out of the ordinary. He's heard rumors recently about an abandoned construction site and ghosts, but nothing else to report on, right?

Wrong. In the space of just a few days, Wataru's ordinary life is turned over when his parents turn out to have a few dramatic secrets of their own. On top of that, he starts hearing a girl's voice in his head late at night, and three of his classmates get beaten up and then vanish — at the hands of the new kid, using magic.

While visiting the supposedly haunted construction site, Wataru discovers a magical portal to the world of Vision — the place where people's hopes and dreams come to life, and magic is real. Brave Travelers, such as himself, have a chance to meet with the Goddess of Destiny, who will grant those who reach her one wish. Wataru knows exactly what he needs: he needs his family kept safe, and his normal life back. Setting off with only a tiny sword, and the assistance of a jovial lizardman and a cute Cat Girl, he makes his way across the strange world of Vision. But not all is right in Vision. Another Traveler is in Vision, and he looks suspiciously like the new kid. And rumors abound of dark things going on in the sky, of an ancient ritual, and of sacrifice...

Naturally, the Vision parts of this story borrows quite a lot from JRPGs, even a simplified two-option version of the Class and Level System.

Not connected to Cave Story or Brave.

This book and its direct adaptations provide examples of: