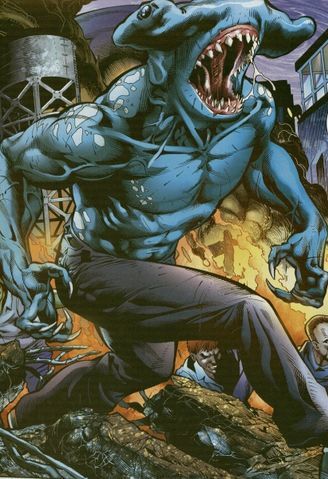 King Shark is a shark.
Advertisement:

Out of all the sea creatures, perhaps none sets in man a Primal Fear quite like a shark does. But what if you want something scarier than a shark? How could we possibly make so fearsome a beast even scarier? Why, by giving him legs, arms, and a human brain! Thus we have the Shark Man. It may be a Half-Human Hybrid. It may be a natural mutation of a shark, a human Super Soldier with shark-like enhancements, or even a wereshark. All that matters is it packs the bestial parts of a shark with the form of a human. Could probably apply with any large sea predator.

A Sub-Trope of Threatening Shark and Fish People.

Gleeman Vox is of a species of shark-like humanoids.

Gleeman Vox is of a species of shark-like humanoids.