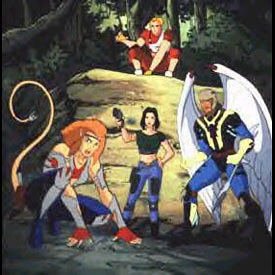 Flash Gordon was a 1996 animated TV series loosely based on the comic strip of the same name. In this version, Flash and Dale are teenagers with a fondness for skateboarding — or in this case hoverboarding — who accidentally get trapped on the planet Mongo thanks to their bumbling scientist friend, Dr. Zarkov. There they are thrown headlong into a rebellion against the reptilian dictator, Emperor Ming. But they aren't alone in their fight; they have help from some of the natives including the gallant hawk man, Prince Talon, and the fierce yet honour-driven lionid, Princess Thundar.

The people behind this series also did Phantom 2040, which depicted Flash Gordon's King Features stablemate The Phantom (or rather, his descendant) as a teenager with a flying motorcycle.