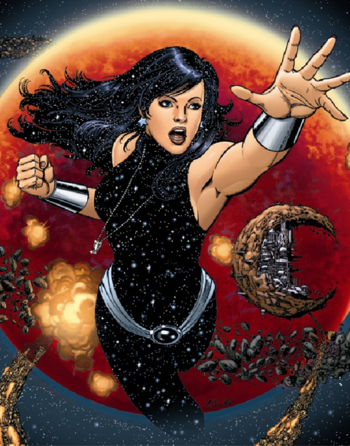 "I'm seeing stars" is not an original pick up line for her.
Mickey: [regarding Zatanna's dress] Are those stars?!
Zatanna: Maybe.
Mickey: Those are real %&$#ing stars!
— Zatanna
Advertisement:

This trope is for people who (whole or in part) appear to be "made of stars". They may appear to be "cut out" of the real world, revealing distant stars and nebulas. It's usually because they are wielders of vast cosmic power or are Energy Beings. Occasionally, they just have a really good tailor.

Basically, these characters are wearing natural camouflage for deep space.

A Sub-Trope of Symbol Motif Clothing.

Compare Chrome Champion, Celestial Body (if someone wearing this actually has stars within them). In live action or animation, this may become a variant of Unmoving Plaid.

Not to be confused with Wearing a Flag on Your Head or Captain Geographic, which describe national-emblem clothing which may or may not include a star motif.

White Diamond wears a cloak that, from the inside, looks like a starry night.

White Diamond wears a cloak that, from the inside, looks like a starry night.