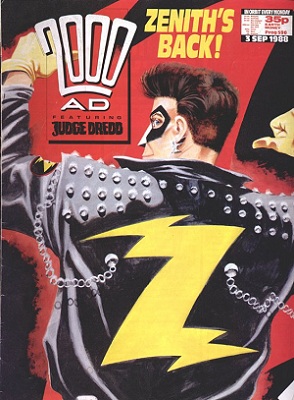 "I'm nineteen, I can fly, I can flatten ballbearings between my fingers and I'm practically invulnerable to damage. I mean, let's face it... what can possibly go wrong?"
— Zenith, tempting fate
Advertisement:

A Super Hero Deconstruction comic created by Grant Morrison and Steve Yeowell. Zenith follows teen superhuman turned pop star Robert MacDowell, more popularly known as his stage name "Zenith" or "Superbrat" to the press. Superficial and spoilt rotten, Zenith is recruited by the previous generation of superhumans to fight against the Lloigor. Unfortunately, as cowardly and inept as he is, Zenith is mostly reduced to being a supporting character in his own comic.

The series was initially published in 2000 AD, spanning four "phases" between 1987 and 1992. Phase III is particularly notable, since it takes place across The Multiverse and featured a multitude of classic British superheroes, both named and ersatz. An incomplete list can be found here

Flying Brick: Lux and Zenith are two of the clearest examples. While there are other superhumans with the strength, toughness and flight to qualify (including some of the Lloigor hosts on alternate worlds), most prefer to rely on some sort of energy attack.