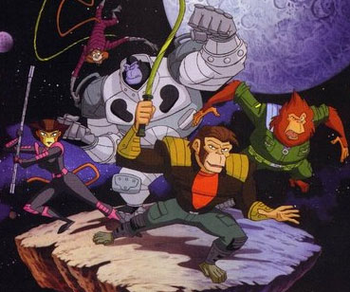 Captain Simian and the Space Monkeys (1996-1997) is an animated sci-fi series focusing on the exploits of a rag-tag crew of an interplanetary ship composed entirely of monkeys from Earth. They have been transformed into anthropomorphic, intelligent versions of themselves by the Applied Phlebotinum of the " ", a mysterious race of benevolent aliens whose name can't be spoken or written, only thought. The sworn enemy of the " " and the Space Monkeys is Lord Nebula, an immensely powerful being who wants to destroy the universe and recreate it in his own image. Nebula's second-in-command is Rhesus-2, a rhesus monkey whom he turned into a Cyborg with several interchangeable brains. Sadly, it was canceled after one season.