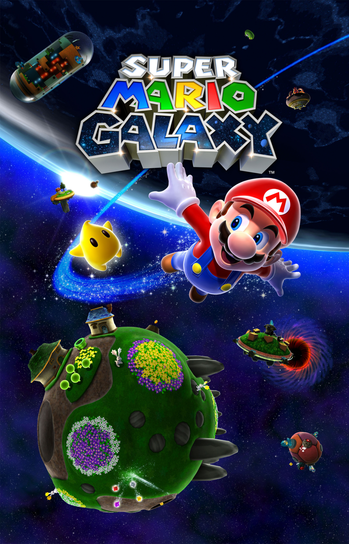 An adventure that's truly out of this world!
"Welcome to the Galaxy!"
Advertisement:

Mario is on his way to visit Princess Peach so that they can observe a comet streaking past the Mushroom Kingdom together, but suddenly, Bowser returns once again to kidnap Princess Peach. The attack launches Mario into space and he awakens on a strange small planet, where he meets Rosalina, a person that protects the cosmos and living star-shaped creatures called the Lumas. After taking Mario to her Comet Observatory, she explains that Bowser has stolen all power from the Comet Observatory to fuel his army and create a new kingdom for himself. Mario must retrieve all the stars for Rosalina so the Comet Observatory can venture to the center of the universe where Bowser awaits...

Released in 2007, Super Mario Galaxy is a Platformer for Nintendo's Wii with gameplay similar to Super Mario 64, though unlike Super Mario 64 and Sunshine, the gameplay is noticeably more linear with less focus on exploration. In this game, Mario flies around from planet to planet with the help of Rosalina and the Lumas to retrieve Power Stars. There are additional gameplay elements utilizing the Wii Remote, such as spinning to attack enemies and jump higher. Power-ups return to this series, two of which are from the original game that started it all.

The game is also notable for being the first Mario game to feature music played by a live orchestra. Though Mario series veteran Koji Kondo was in charge of the soundtrack, the orchestrated bits were done by Mahito Yokota, who was previously the composer for Donkey Kong Jungle Beat. As a result of working on this game, Yokota has become the go-to guy for orchestral arrangements for games that Kondo has composed for.

A direct sequel, Super Mario Galaxy 2, was released on May 23, 2010. This game got an Updated Re-release on the Nintendo Switch in September 2020 as part of Super Mario 3D All-Stars for the 35th anniversary of Super Mario Bros.