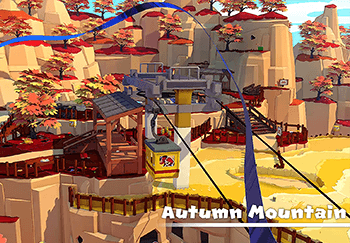 Who needs growing seasons when you've got scenery this nice?
"I have a really keen interest in level design. Especially unconventional level design. Ideas that have gone unnoticed, methods that have rarely been used, and you know what I really don't see very often: the Autumn Level. More specifically, the Autumn Forest. Yeah, I'm classifying that as a theme. Because, in many respects, it is a theme. It's a theme characterized by a very specific color palette. A very select state of being. It's a season of the year. A phase of change in physical form, and as far as level design goes, well... it's beautiful."
— Jordan Underneath, "AUTUMN LEVELS — Underneath (Fragments)"
Advertisement:

In large-scale games that feature a wide variety of locations themed along the lines of Green Hill Zone or The Lost Woods, the developers may choose to mix things up with one wooded area that is in autumn even though other such areas are in spring or summer. Whereas other areas will have green and fully-leaved trees, this area will have brown and orange leaves on its trees. Unless the setting is a fantasy world where A Wizard Did It, there will almost never be an explanation for why this area is experiencing a different season from the rest. The out-of-story explanation, though, is because autumn is very pretty while also being a nice change of pace from spring and summer settings, while winter will almost guarantee an ice level.

Contrast with Four-Seasons Level, when one area experiences multiple seasons in course of the game. A localized aversion of It's Always Spring. If the game world transitions from a normal forest to this one very abruptly, it can produce a Patchwork Map. May overlap with It's Always Mardi Gras in New Orleans if the story takes place in a setting with prominent autumn holidays such as Halloween or Oktoberfest.

Pretty much exactly what the name implies.

Pretty much exactly what the name implies.