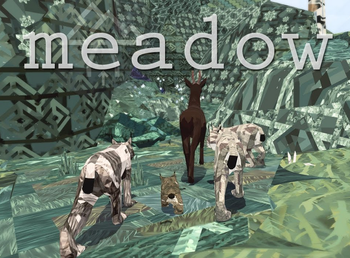 Meadow is a MMO Walking Simulator game released on Steam in 2016 by the Swedish company Might and Delight as a part of their Shelter franchise. It was dubbed by the developer as a "forum in game's clothing" where you play as a forest animal, explore the world and interact with other players using simple emotes, symbols, actions and sounds, in order to unlock new playable animals, skins or emotes and generally have a good time. Unlike the other Shelter installments, Meadow does not feature any survival elements or enemies, going instead for a relaxing atmosphere of exploration and friendliness. The developers interact actively with the fanbase, and the game gets regular updates.