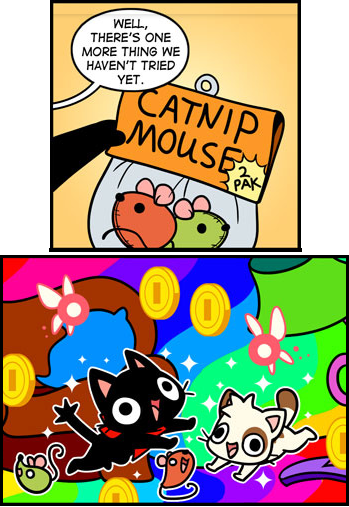 Catnip is LSD.
Roofshadow: Your friend is either a glutton or a fool — or both. He stinks of catmint. Only a mad one would eat enough to make him reek like that.
Pouncequick: What will it do to him?
Roofshadow: I don't know with surety, youngest hunter. It is known that too much of the catmint leaf and root will frighten and speed the heart, but he is young and strong. What it does to the spirit, though, that is a difficult question. A little lightens the ka, and brings out song and happiness. Much more and the taker grows strong and fell, full of odd dreams. As much as your friend has had... Harar, I do not know. We must have patience.
— Tailchaser's Song
Advertisement:

So, sometimes the writer wants to show a character acting stoned, drunk or hallucinating for the purpose of comedy. When the character in question is a cat or other feline, the "drug" of choice will often be plain ol' catnip.

This has several advantages. For starters, it prevents the writers from having to put any "real" drugs into the story to get the desired result, and secondly, for talking or humanoid felines, it serves as a Furry Reminder, giving an otherwise human-acting animal a realistic behavioural quirk for their species. Such a scene can also be used to avert the snobby, uptight stereotype often associated with cats.

If you really want push the allegory, show Anthropomorphic cats smuggling and hiding catnip as if it were an illegal drug, and/or smoking or snorting it. If a normal human can get high off the stuff, it may serve to enforce an Animal Motif or give an impression of general quirkiness.

This is Truth in Television. Not only does catnip have similar effects to marijuana for felines, but it also can have a soothing effect on humans and has often been brewed into tea and, yes, even smoked. It is a muscle relaxant, and catnip and hop brew makes a good sauna water additive.

Sub-Trope of G-Rated Drug, I Can't Believe It's Not Heroin!.