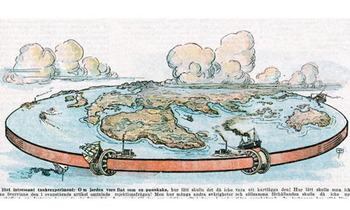 If you walk far enough, you'll fall off the edge of the world. For this world is not round, but flat. What lies beyond the edge? No one knows.

In ancient and medieval history, many cultures believed the Earth was flat. Certainly, the curvature is so slight that it wasn't until the Greeks that the spherical Earth theory took hold, though some earlier people possibly knew it was round as well, such as Hindus and the early Hebrews. Contrary to popular belief, Christopher Columbus didn't have to try and convince people that the earth was round. Rather, he thought it was much smaller than it's turned out to be. His opponents were right in saying the Earth is much larger. The idea of it being about if the earth is flat or round dates from Washington Irving's 1828 novel A History of the Life and Voyages of Christopher Columbus, and has survived as an illustration of Medieval Morons.

Flat worlds typically only appear in fantasy, but some science fiction works include artificial megastructures that are for the most part equivalent in appearance.

Flat worlds can be broadly divided between several kinds:

These worlds are almost always circular — other geometric shapes, such as triangles, squares or hexagons, are not unheard of but are much rarer.

It is worth noting that some people actually believe this, right now, in the 21st century. According to them, the world is a flat, circular disc with walls of ice surrounding Earth. Almost everything about astronomy that could be considered common knowledge is believed to be false.

A subtrope of World Shapes. Not be confused with Flatland or The World is Flat.

The Tuttles visit a dimension where a flat Earth actually exists. Even better, everything and everyone on the planet is flat as well.

The Tuttles visit a dimension where a flat Earth actually exists. Even better, everything and everyone on the planet is flat as well.