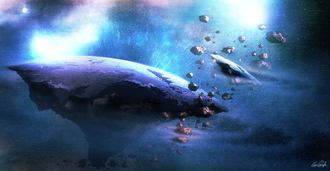 Guys, when did we break off?
Illustration by Greg Martin.

In a Shattered World, this is not the case.

Maybe magic or science has Gone Horribly Wrong, causing an Earth-Shattering Kaboom, or maybe something else bad has happened, but a former planet is now broken into small pieces, floating through space. If this trope is used as a setting, these pieces will usually have settlements of some sort on them (not to be confused with Asteroid Thickets, which are normally just obstacles). The question of why the pieces have not clumped back together by gravitational pull may or may not be addressed.

Unlike a Floating Continent, a Shattered World isn't hovering over a planet.

Often a case of Artistic License – Space, as any round object that's large enough is held together by its own gravity too well to be broken apart like this. If some world shattering event were to happen, the debris would fall back into the larger portion, which would also collapse into a sphere, rather than remaining a broken sphere.

If the pieces are somehow hovering in an atmosphere with gravity, that's World in the Sky.