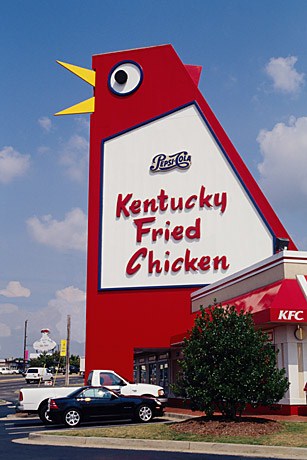 The Big Chicken, an Atlanta landmark. Yes, the eyes and beak move.
Advertisement:

Sometimes the easiest way to tell what a store sells is by looking at the shape of the store itself. Like a library shaped like a stack of books or a Burger Shack that's a giant burger, Shaped Like What It Sells is a building that is modeled and designed to look like the product(s) that's inside of it. According to The Field Guide to Sprawl, in Real Life, the name for this type of a building is a "duck," after a duck-shaped duckling stand. (The term was coined by architect Robert Venturi.)

Should a giant entity mistake it for the real deal, This Billboard Needs Some Salt will likely ensue.

A Subtrope of Bizarrchitecture. Supertrope of The Dinnermobile. Not to be confused with Shaped Like Itself. Compare with Exactly What It Says on the Tin.