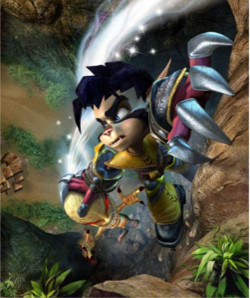 The "plot" of the game, such as it was, was about the world of Astara, which is currently experiencing the effects of After the End. The planet's original inhabitants developed interdimensional technology, and promptly opened a portal that released demonic hordes into their realm. Seven hundred years later, the Astani are gone, and the inhabitable chunks of Astara are populated by little elf/werewolf/pointy eared critters (confirmed in source material as the Valdar), one of which is our eponymous hero. One day these creatures are attacked by one of the aforementioned demons and his underlings, and forced into slavery. Our hero attempts to fight back, only to have the full wrath of the demon lord, named Dark Yabu, turned on him. Vexx's grandfather Vargas attacks Yabu in turn to gain his attention, sacrificing himself to save his grandson.

That night, Vexx sneaks onboard Dark Yabu's airship and finds the magical Astani war talons, big clawed gauntlets that promptly fuse themselves to Vexx's hands and blow up the airship.

Vexx awakens in the land of Timberdale, and he is told by a wizened old coot named Darby that he must collect Wraithearts, the undead hearts of defeated demon lords, to power the ancient Astani portal system and ultimately open a portal to Dark Yabu's fortress and defeat him.