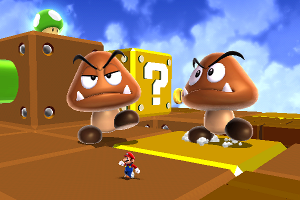 In Macro Zone, Goomba stomps you.
"Somebody tell me how I got so SMAAAAAAAAAAAAAAAAAALLLLLLLL!!!"
— Ventus, Kingdom Hearts: Birth by Sleep
Advertisement:

An area in a video game where your character is tiny relative to their surroundings. The environment is usually some mundane area like a garden that is rendered interesting by the change in scale. Enemies are more often than not giant insects or old fashioned windup toys. Natural hazards like thorns, giant feet, bouncing balls, and frayed electrical wires are everywhere in these small scale environments.

If your heroes are naturally small, all of the game's levels may be various Macro Zones. Another common scenario is to have your characters shrink temporarily, often to sneak through a small opening, or retrieve an item.

Prehistoric levels may partially be Macro Zones, since everyone knows that the distant past was filled with enormous flesh-eating insects and Man Eating Plants. If your tiny character is inside another creature's body, you also have a Womb Level on your hands.

Named for the Macro Zone in Super Mario Land 2: 6 Golden Coins, where Mario had to work his way through a normal-sized house while the size of a bug. Rarely contains actual macros. For non-game examples, see Incredible Shrinking Man. See also Mouse World. Contrast Attack of the 50-Foot Whatever, which is what happens when your character gets super-big compared to the background, or Kaiju, a subtrope of 50-Foot Whatever, dealing specifically with evoking Japanese-style giant monsters.

You fight Werner Werman inside of a massive house.

You fight Werner Werman inside of a massive house.