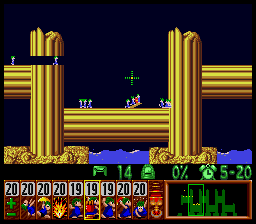 So many lemmings, so little time...
"WARNING: We are not responsible for:
Loss of sanity
Loss of hair
Loss of sleep"
— box cover
Advertisement:

What long-time gamers will ultimately remember about the Lemmings games is their ingenuity. How many different ways are there to endanger the lives of a band of green-haired rodents willing to tromp blindly along whatever paths you lay for them? Thousands. In game after game, the developers, DMA Design (you probably know them better by their later name, Rockstar North... yes, that Rockstar North), proved they could come up with hundreds of variations on this simple theme.

It works like this. Each stage of the game is either a labyrinth or a Death Trap (and frequently both). A gate opens somewhere on the level and begins to release lemmings into the stage one by one, who mindlessly walk forward into whatever awaits them, whether it means falling down a Bottomless Pit, into water, fire or lava, or any number of actual traps. Enter you, the player, armed with a cursor and a set of very limited tools for altering the lemmings' behavior. Your task is to make the critters traverse each screen towards a specific exit without letting too many of them get splatted, drowned, scorched, sliced, beheaded, or otherwise killed in the process. The solution to a level could be devilishly hard to find, and until you did, you had to put up with the sight of your adorable little lemmings meeting their maker by the dozen. The bizarre combination of cutesy graphics, mind-bending puzzles, and grisly, relentless death of the pixelated creatures no doubt left many a seventh-grader scarred for life. It's basically a game all about Suicidal Lemmings.

For the first game, at least, there were eight tools available for the purposes of getting the hapless lemmings to the exit:

Sure, the puzzles are simple — at first. In one stage, you might have to turn your lemmings into "Diggers" and burrow through the soft soil to the exit. In another, you might have to use the "Blocker" skill to keep the lemmings from walking off cliffs, or the "Builder" skill to allow them to climb one. But by the time you get to around level 20 or so, you'll be staring at the screen and saying "Now, wait a second. There's just no way to solve this one. They must have made a mistake!"

They didn't. Like few others, these games reward cleverness, persistence, and non-linear thinking and keep you coming back for more.

Originally developed for the Commodore Amiga, Lemmings is one of those games that has, like Tetris, been ported to virtually every console and platform in existence

. New games were inevitable, and include:

They certainly were damaging for the Lemmings, and also had Gravity Screw, taking the Lemmings upside-down in some cases. In any case, they acted as a quasi-Unrealistic Black Hole.

Superb! You read every trope on this page. Can you do it again....?