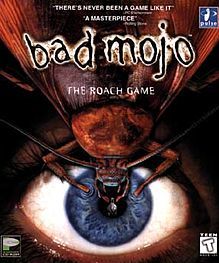 All my life, I've felt helpless, cheated, stepped on. I was always the little man, the square peg, the forgotten one. But that night, everything was gonna change...
Roger Samms, Opening Narration
Advertisement:

A.K.A The Roach Game.

Bad Mojo was a 1996 FMV game by Pulse Entertainment. In it, you play as a down-on-his-luck entomologist named Roger Samms. He lives in a seedy apartment in San Francisco and gets little to no respect from his landlord, Eddie Battito. As the game opens, Roger has embezzled money from a science loan and is preparing to skip town for Mexico City. However, as he is packing, Roger pulls out the locket he got from his deceased mother. The locket suddenly activates and unleashes bad mojo onto Roger, turning his soul into a cockroach. Now Roger must find out what's going on and how to reverse it, guided by a mysterious woman named Oracle within the locket.

The game was known for its very, very creepy visuals as you wander around the bar. Since you're playing as a cockroach, you're virtually helpless against larger enemies and the environment and thus have to find a way around the level that will let you pass safely.

Bad Mojo has the following tropes: