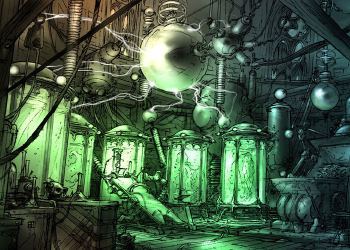 Every Mad Scientist has to have a lab. This is typically a refurbished dungeon of some sort, with aging stone walls. It also must contain most of the following lab equipment:

Never mind that real science does not generally call for all of these things at the same time — or within the same discipline! — the Mad Scientist doesn't specialize. All the same, most of what he does will at least look like chemistry, since nothing shouts "science" to the casual viewer more than a guy in a lab coat fiddling with a beaker of colored liquid.

Laboratory glassware frequently shows up in period settings that predate their invention. Erlenmeyer Flasks, glass retorts, Griffin/Berzelius beakers, separatory funnels, Leibig condensers, and even test tubes date back only as far as the late 18th century at best; some of these were clearly developed in the mid to late 19th century. Dedicated laboratory equipment did not truly exist prior to the early 1800s and even then would have been primitive bearing little resemblance to familiar modern glassware. Prior to that, much chemistry was done with whatever bowls and jars were already available. Other equipment (such as alembics) was made of metal.

Also never mind that modern chemistry has very little use for the big impressive glass-sculpture thing with with a lot of burettes, condensers, and funny coils of glass. (These actually were useful constructs at one time, but they're the chemistry equivalent of doing differential equations on an abacus. Also, even when they were used, a typical experimental setup would have consisted of three to six of the pieces put together; never dozens of pieces, all connected, as shown on the screen.) Most of these glassware setups appear to be inspired by random fuzzy pictures of the classic Miller-Urey experiment which can actually be simplified once you understand what is actually going on. But you need this stuff because otherwise, the audience won't realize that Science goes on here.

A significant portion of mad scientist laboratories are not low budget small scale DIY projects that take up no more than a spare table in a corner. Instead, these labs are very elaborate for someone who usually does not appear to have anyone funding them, let alone working for them. Often the equipment is huge, bulky, unweildy, and difficult to transport and assemble for just one man, even with an assistant. It's worth remembering that many mad scientists are older men (or physically weak men) who would definitely not be able to manage such a feat on their own. While not a mad scientist, Batman fans will recognize a modern iteration of this dilemma whenever the question is posed of how Bruce Wayne (maybe with Alfred's help) managed to build the Batcave, Batmobile and all his equipment by himself in secret.

The archetypical movie Mad Scientist Laboratory probably came from the classic silent film Metropolis, though Universal's Frankenstein (1931) added a fair amount. Both were probably strongly influenced by a real-life example that was a staple in popular media between 1900 and 1940; the various laboratories of Nikola Tesla, which actually did feature gigantic incomprehensible machinery, scary robotic devices, Tesla coils, and lots of gaudy electric-arc effects.

All of the film, TV, and comic versions of the Mad Scientist's Lab derive originally from Gothic horror stories of the 18th and 19th centuries, the most famous of them being Mary Shelley's novel Frankenstein and H. G. Wells' The Island of Doctor Moreau. The concept developed from older stories about the lairs of alchemists and sorcerers. The Enlightenment put paid to many kinds of mystical dabbling by dilettantes, tinkerers, and wealthy eccentrics, but these characters were replaced in the public imagination by gentleman scientists — many of them self-taught, many very eccentric — who built laboratories and observatories in their homes and made a number of important discoveries in the new disciplines of chemistry, physics, and biology.

The age of the gentleman scientist was ending by the 1850s, when the most famous of them, Charles Darwin, published his Theory of Evolution. More and more, experimental research became associated with facilities provided by universities, foundations, museums, governments and industry. However, the romantic image of the mad scientist — isolated from his fellows and angry with a world that would suppress his ideas — has deep archetypal power. It's also dramatically compact, needing only the scientist, an assistant, and a faithful servant or two as characters. The meme's emotional energy and enactment efficiency has kept it alive into the 21st Century, and it's even routinely projected into future scenarios via television shows like Star Trek and The Outer Limits (1963).

This is edging toward becoming a Discredited Trope, at least in the classic beaker/Jacob's Ladder/operating table configuration. For the more modern variations, see Hacker Cave.