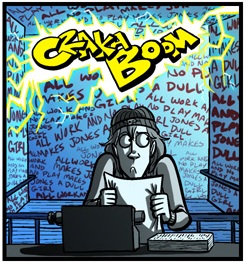 One of the standard symptoms of insanity as it is portrayed in television and film media is paranoia accompanied by graphomania, usually expressed by writing on walls, tables, body parts, etc. It can be the same phrase written dozens of times, or an elaborate theory detailing a supposed conspiracy. Confessions, mathematical equations, rants, and screeds are also popular. These can be supplemented with pictures, newspaper articles, official documents, etc. Usually, a character will find some room in their environment upon which to fully express the terms of their obsession. And don't expect these characters to be deterred by the fact that they Couldn't Find a Pen; they'll write with their own blood if they have to.

Characters who display this kind of behavior are not always dangerous or even fully insane, but they are always obsessed.

A detective/doctor/family member can stumble across rooms full of these kinds of paranoid obsessive ramblings and realize that they are Alone with the Psycho. It's not unusual for this moment of discovery to be quickly followed by an attempt on the discoverer's life by the owner of the room. These rooms can be also be susceptible to cases of vanishings as well. (Curse you, Pine Sol!)

It should be noted that a character doesn't have to cover the walls with writing to make this an effective trope. A neatly typed ream of crisp white paper reading "All work and no play makes Jack a dull boy" will work just as well.

If the Room Full of Crazy is specific enough, for example, only part of a wall is covered with photos of the same subject, it may be a Stalker Shrine. A Shrine to Self may likewise double as a Room Full Of Crazy for Omnicidal Maniacs and the like. If the room is used for plotting a conspiracy theory, it's a String Theory. The Black Bug Room is the mental version of this. The Doll Episode may include a room full of dolls for similar effect.

Compare Mess of Woe. Not to be confused with a Wall of Text, which is about something else entirely. The Big Board is the non-insane version of this.

Has nothing to do with the level of insanity present in The Room.

To hide from the Killer Robot sent by Andrias to kill Anne, the Boonchuys and the Plantars went into Mrs. Boonchuy's "workout room"... which is filled with homemade dummies of Anne that she made to cope with her daughter's disappearance throughout the series.

To hide from the Killer Robot sent by Andrias to kill Anne, the Boonchuys and the Plantars went into Mrs. Boonchuy's "workout room"... which is filled with homemade dummies of Anne that she made to cope with her daughter's disappearance throughout the series.