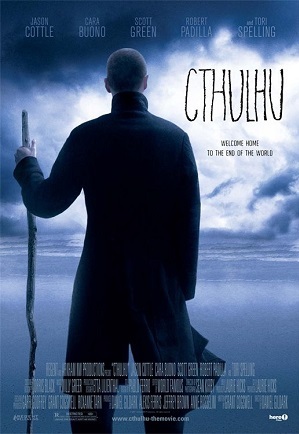 "Do it, Russell! Make sacrifice! Look! Look into the red eye of your god!"
— Reverend Marsh
Advertisement:

Russell Marsh, a gay professor of history in Seattle, returns to his hometown of Rivermouth, Oregon after a long estrangement from his family to execute his late mother's estate. He becomes reacquainted with his childhood friend and lover Mike, and over the next few days becomes aware that his father's New Age cult, The Esoteric Order of Dagon, is planning to bring about The End of the World as We Know It.

It should be stated straight up that Cthulhu does not have H. P. Lovecraft's most famous Eldritch Abomination in it. Cthulhu is loosely based on The Shadow Over Innsmouth with elements of The Call of Cthulhu thrown in, but overall it's best if you view this movie as one that simply draws on the Cthulhu Mythos rather than an adaptation of the above stories.

Cthulhu contains examples of the following: