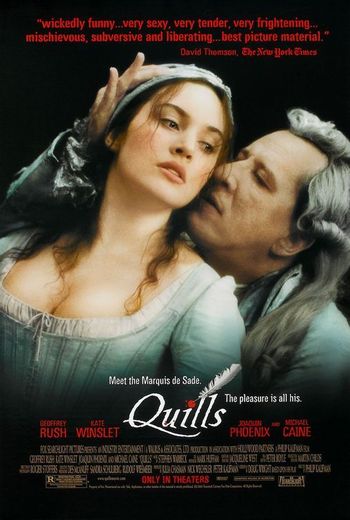 Meet the Marquis de Sade. The pleasure is all his.
"I write about the eternal truth that bind together all of mankind; the whole world over. We eat. We shit. We fuck. We kill. And we die."
— Marquis de Sade
Advertisement:

A 2000 period drama film, directed by Philip Kaufman and written by Pulitzer Prize-winning playwright Doug Wright, who adapted his own play of the same name. The film follows the (highly fictionalized) last years of the Marquis de Sade (Geoffrey Rush, in an Academy Award-nominated role), the notorious 19th-century French nobleman, author, philosopher, and libertine. The film is set at Charenton, a lunatic asylum where Sade has been sent for his continued publication of pornographic novels that double as nihilist philosophy tracts.

Charenton is run by the Abbé du Coulmier (Joaquin Phoenix), a rather progressive administrator who allows the Marquis to continue writing, on the theory that doing so will "purge" the evil from his mind. But unbeknownst to the Abbé, Madeleine LeClerc (Kate Winslet), a laundress at the asylum and a protégé of the Marquis, has been secretly smuggling the writings to the outside world, where they are published anonymously to great success. This turns out to be a mistake, as the Emperor Napoleon (Ron Cook), realizing who the author is, orders the renowned "alienist" Dr. Royer-Collard (Michael Caine) to go to Charenton, where he is tasked with silencing the infamous Marquis...by any means necessary.