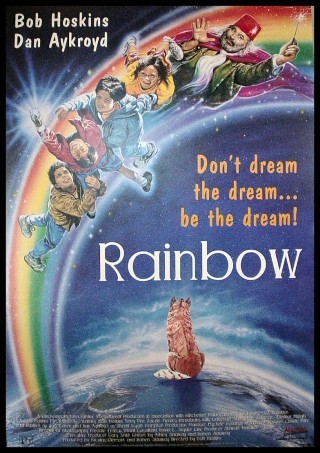 Who needs to go over the rainbow when you can go in one?
Advertisement:

Rainbow is a 1996 family film directed by Bob Hoskins, who also stars in it along with Dan Aykroyd.

The plot revolves around three kids - Mike, Peter and Tissy. One day they witness a rainbow actually land. Taking a soil sample from the crash site allows them to somehow track where a rainbow will land next. The next time it rains, the kids (and Mike's older brother Steven) manage to track the rainbow and actually travel inside it. However, while inside, Steven steals some of the golden nuggets that helps the rainbow work. When they get back to Earth, colour starts draining from the world. Soon oxygen starts being drained from the world too, threatening life. Naturally the only way to stop this is to retrieve the gold and put it back in the rainbow.

It was also the first film to be shot in HD video. The scenes inside the rainbow were filmed with prototype HD cameras.

Not to be confused with the anime with the same name, the beloved children's series or the rock band.