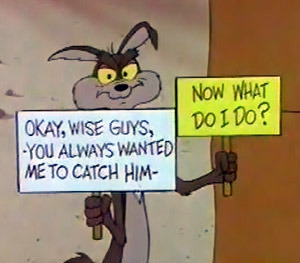 The joke is that Wile E. Coyote ended up tiny after a pipe gag.
Shredder: As soon as we destroy Splinter and the Turtles, our work will be done!
Krang: And then we will go into reruns!... I guess.
— Teenage Mutant Ninja Turtles (1987)

So the series ended with the Masquerade being lifted, or the couple getting together in the last five seconds of the show or otherwise the characters’ one single goal they ever wanted has been fulfilled. The ramifications of this are staggering: after all, how on Earth can the writers depict the consequences?

Solution: they don't. Everyone either lives Happily Ever After or has a Downer Ending, but it's not the writer's problem anymore.

Woe to any writer who is suddenly has to answer this question because of a show being unexpectedly Un-Canceled.

May overlap with Lonely at the Top. Not to be confused with the "What Now?" Ending or And Then What? See also So What Do We Do Now? or Post-Script Season.