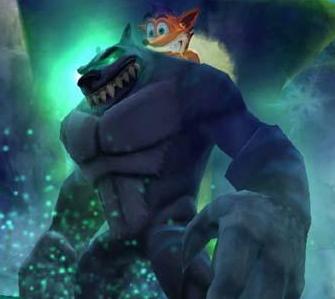 When you're a titanic, mutated beast of destruction, and a bandicoot can possess you via piggy back riding, you're a B.D.B.
Advertisement:

A type of controlled Host that is chosen for physical prowess and ability rather than anything else (usually also being simple minded enough that possession works without a hitch, although you don't need to be smart to have a strong will...)

Can also apply to mounts, if the mount is more than twice the size of the character riding it and not at all intelligent. In fiction, Elephants and creatures of similar design are not nearly as smart as they would be in real life (bigger bodies tend to come with bigger brains, and that bigger brain will often get put to use developing social skills and such).

Regarding possessors, a Symbiote is an example where the host is usually the bigger and more physical of the parties involved, as opposed to the parasite. While a Demonic Possession usually has the opposite, where the demon is the source of the host's strength and power, however, a B.D.B. possessed by such an entity becomes a Living Bodysuit.

Most B.D.B's are Giant Mooks or even bodyguards who are forced to take the blame for killing their charge after the possessor has relieved control (though this can end with the B.D.B also being discretely killed off to further suspicion and/or confusion).

In some cases, it's safe to say that a B.D.B is a more powerful version of the standard Meat Puppet, though expected to be less common. Contrast The Dividual. Not to be confused with Dumb Muscle, though Dumb Muscle characters may end up as Big Dumb Bodies; or the Big Dumb Object, whose only common trait is that they're big (and not even that they're dumb). A Custom Built Host will often be one of these, as its creators have no need to give it a mind of its own.