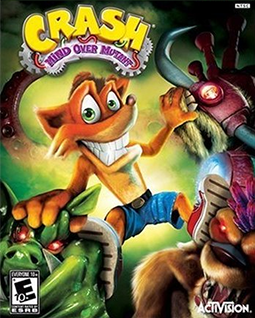 Crash: Mind over Mutant is a Beat 'em Up/platformer hybrid, developed by Radical Entertainment for the Crash Bandicoot series, released for the PlayStation 2, Xbox 360, PlayStation Portable and Nintendo Wii in fall 2008. The title is Radical's final game with the series (as well as the final original game in the series until 2020's Crash Bandicoot 4: It's About Time). It is a direct sequel to Crash of the Titans.

Retaining many aspects of Titans' gameplay, it generally leans a lot more towards a platformer, with combat being made less relentless and frequent. The game abandons levels for a "free-romping" world where the player can enter areas of the game's world by exiting others, giving the player more freedom than in Titans. The game also brought about many small improvements. The player can now pocket a Titan or alternate between two different Titans and even upgrade Titans, and they were also given abilities such as jumping and ledge climbing for use in platforming. The game also gets rid of the previous game's life system and adds Coco Bandicoot as a playable character...for Xbox 360 and Wii only.

The game takes place one year after Titans and is centered around a device built by Neo Cortex and the newly-rekindled Dr. Nitrus Brio called the NV, which later gets shipped to Wumpa Island for free. Crash and co. soon receive a package containing a few. Everyone on Wumpa Island except for Crash and Aku Aku (who can't use them) like it...until an addiction sets in and makes them all become crazy. After the discovery that this is yet another plot of Cortex's to take over the world, Crash must set his friends free from the NVs' control and take the scientist on again.

Like with Titans, a Nintendo DS alternate version was released. This one was a bit...different, one could say.

The portable version contains examples of: