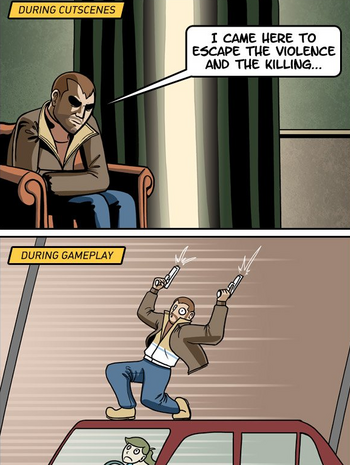 Really, Niko?
Butters: Aw, he died. I really thought that was gonna work.
Old Mechanic: Nope. That resurrection dirt's only a combat mechanic. Nice try though.
— South Park: The Fractured but Whole: Bring the Crunch
Advertisement:

This occurs whenever there is inconsistency in how things work or behave between the gameplay and storyline sections of a video game, the latter of which generally consists primarily of cutscenes and dialogue. While this is generally forgivable due to technological limitations, egregious instances can result in the shattering of the player's Willing Suspension of Disbelief. Typically, it's done to try and make a more interesting game, since simply getting a One-Hit Kill all the time like in that cutscene would be utterly boring, while having a person who can't open doors like in that last cutscene would make the game needlessly frustrating. Accordingly, it's sometimes excused by Acceptable Breaks from Reality, but by no stretch does that justification cover all of the flat-out weird mismatches perpetrated by game makers over the years.

Since large-scale cutscenes and extensive dialogue have only been present in games the last twenty years or so, gameplay and story segregation is far more prevalent from the 16-bit era onwards, especially ones in which the storyline is a focal point of the game. Often times the "gameplay" part is where a genuine Faux Action Girl gets to show her skills and defeat a Big Bad on her own.

A loosely equivalent technical term for this is "Ludonarrative Dissonance,"

a term coined by Clint Hocking (a former employee of LucasArts). "Ludonarrative" is the portion of the story told through the gameplay ("ludo" comes from the Latin word meaning "play" or "game"), so ludonarrative dissonance is when there are logical inconsistencies between what is conveyed through the gameplay and what is conveyed through the story, or when the gameplay is presenting one message while the story is presenting another. The term as it is used today lies closer to Broken Aesop that comes from the messages of the gameplay mechanics undercutting the messages of its narrative, rather than just continuity conflicts between the story told through gameplay and the actual story.

Gameplay and story segregation is the more egregious half of the Sliding Scale of Gameplay and Story Integration. See that article for common templates and examples from the opposite side of the scale: gameplay and story integration. Licensed Games as a rule are subject to this, as there is a preceding story in another medium and its plot elements are often represented in a varied way.

Forms of Gameplay and Story Segregation include:

Forms of Gameplay and Story Segregation

See also The Anime of the Game and New Rules as the Plot Demands.

Action Adventure
Action Game
Adventure Game
Beat 'em Up
Card Battle Games
Fighting Game
All fighting games fall under this trope to some degree. Due to balancing, no character (except maybe a SNK Boss) is as powerful or weak as the storyline says they should be.
First-Person Shooter
Hack and Slash
Maze Game
Miscellaneous Games
MMORPGs
Party Game
Platform Game
Puzzle Game
Racing Games
Real-Time Strategy
Rhythm Game
Role-Playing Game
Simulation Game
Sports Game
Survival Horror
Tabletop Games
Third-Person Shooter
Turn-Based Strategy
Wide-Open Sandbox
This is inevitable in any open world game with a well-developed, linear story. The wide array of things to do in the sandbox will inevitably result in the player engaging in actions contrary to the character's beliefs, personality, or motivations according to the story.
Other