Video Game / Crash of the Titans 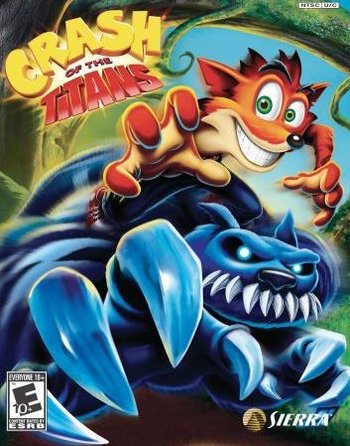 Crash Of The Titans is a Beat 'em Up/platformer hybrid, developed by Radical Entertainment, as part of the Crash Bandicoot series, released for the PlayStation 2, Xbox 360, PlayStation Portable and Nintendo Wii in the fall of 2007. It was Radical's second game for the series following Crash Tag Team Racing.

The game was the first of a light reboot of the series, with massive aesthetic and gameplay changes. The characters received their most radically different redesigns yet, both in terms of appearance and personality, occasionally to the point of bearing only a passing resemblance to their older selves. The gameplay, while still having a focus on platforming, put in a much greater deal of combat by allowing Crash to punch and kick enemies, block, and more. The game's main gimmick is the use of "Titans", large mutants that are far more powerful than Crash himself and often must be taken control of by Crash by "jacking" them.

The game's story centers on the discovery of a substance known as "Mojo", which Doctor Neo Cortex plans to use to turn the inhabitants of the Wumpa Islands into an army of loyal mutants known as "Titans". Crash must stop Cortex by using the technique of "jacking" to take control of and destroy Cortex's Titans while collecting the mojo.

Versions of the game for the Nintendo DS and Game Boy Advance were also released, but differ quite a bit from the console versions both in terms of gameplay and plot. The former put in a greater emphasis on platforming and a generally greater number of cues from the Naughty Dog installments of the series, while the GBA version is more of a straight Beat 'em Up.

A direct sequel was released a year later, called Crash: Mind Over Mutant. Like this game, there are console and Nintendo DS versions and each one is slightly different from the other.

The portable version contains examples of: