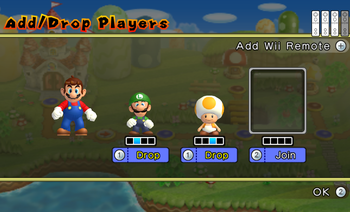 In most video games, multiplayer is a matter of choosing the number of players at the start, and then getting a game going. This can be a problem if someone wants to join later. For example, have you ever been playing a game alone that you and your sibling both enjoy, when they suddenly walk into the room and want to play too?

The solution to that problem is Drop-In-Drop-Out Multiplayer. The ability to join at any time, and just as crucial, the ability to leave at any time (which helps you avoid that annoying problem where your little sibling suddenly doesn't want to play anymore, leaving you with a second character just standing there). These titles have no real distinction between single and multiple-player games, since those initiated as one type can easily turn into the other and back.

This solves more than just the sibling problem — it's also is what makes games with large player limits practical. The Game Lobby system, which requires players to get together ahead of time in a group and start the game all at once, would simply never allow for such games to happen by itself.

Since this means remaining playable with a fluctuating number of players, such games are usually either Co-Op Multiplayer or heavily reliant on bots.