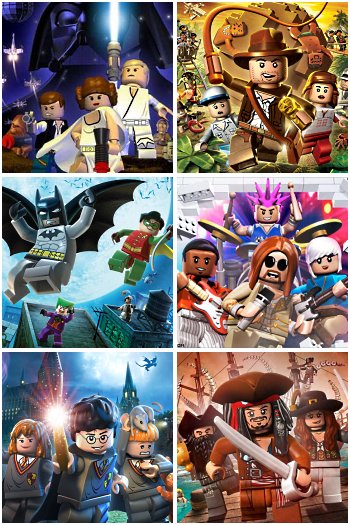 So a Jedi, an archaeologist, a superhero, a rockstar, a wizard, and a pirate walk into a toy store...note ...and those who forgot to go to said toy store include a team of Marvel superheroes, a Hobbit, The Special One, a Tyrannosaurus Rex, a family of superheroes, and the Toa Inika.
Advertisement:

"LEGO Adaptation Game" is a catch-all term for a loosely-connected series of Multi-Platform Video Games made by Traveller's Tales, based on combining the license for LEGO with that of another work, generally a film, as tie-ins to licensed toy lines based on the same films LEGO is producing and selling around the same time. With few exceptions, the games are action platforming games with the characters and stages all consisting of LEGO interpretations of the licensed work in question, with tongue-in-cheek, often parodical Cutscenes poking fun at both those works and the fact that they are made out of LEGO bricks. They generally follow the original work's story, but with a Denser and Wackier tone.

In these games, death is just the character falling apart and, if it's a Player Character, reforming with just the loss of a few small round LEGO bricks referred to as studs, which are the currency in these games.

The real meat of the games is the quest to 100% Completion; while simply completing the levels are typically a stroll in the park, many collectibles and rooms in every stage are initially inaccessible until the player acquires a character with a specific ability (like super strength or the ability to destroy metal objects). Replaying stages and exploring overworlds with these new characters reward players with more collectibles and playable characters (often numbering in the triple digits per game) until players hit the magical 100%.

(In the order each subseries debuted)Related LEGO games include LEGO Rock Band, LEGO City Undercover, and LEGO Dimensions. Many of this series' crossovers have also made the jump to animation - LEGO Batman: The Movie - DC Superheroes Unite is even a straight-up adaptation of the LEGO Batman 2 game.

The games are rife with numerous shout outs, much as you'd expect from a franchise affectionately parodying popular films.