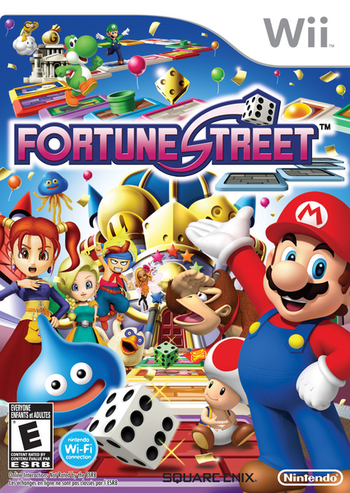 The North American box art of the Wii game.
Advertisement:

Itadaki Streetnote lit. "Top Street" is a series of multiplayer computer board games originally created by Yuji Horii, Dragon Quest's designer. As far as gameplay is concerned, there are many parallels to the classic Monopoly board game. Players roll dice and go around a board, purchasing properties and trying to earn a required sum of money to win a match. However, players can also earn money by buying and selling stocks, by winning minigames, by drawing Venture Cards, and by collecting card suits (diamond, club, heart, spade) and returning to start.

A stripped-down version also appeared in the form of the Command Board minigame in Kingdom Hearts: Birth by Sleep.

Tropes in this series (primarily the Wii version) include: