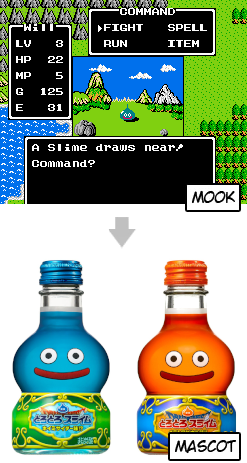 Most Mooks exist solely to die en masse at the hero's hands. Some become emblematic of the series in the process.

The Mascot Mook combines the ubiquitous nature of a Mook with the iconic appeal of a Mascot, and despite lacking Nominal Importance these guys have become spotlight stealers among the game's bestiary.

Perhaps there's something memorable about their design or behavior. Maybe they are one the more basic and common enemies so their presence becomes a part of the series' setting. Maybe they are so cute or goofy that the player can't help but smile every time one of them pops up — despite how often they will suddenly pop up or how many of them the player will slaughter throughout the game. Or perhaps it's that they're the most consistently-appearing characters, with each installment otherwise using a completely new cast.

Whatever the case, these Mooks have somehow become just as vital to the series as a whole as your core party members are to the narrative of each separate installment. Fans silently expect these guys to appear somewhere in each and every installment (often in multiple versions), simply because they always have, and no new game would be fit for release without their appearance.

While this trope is most prevalent in video games, it is by no means exclusive to them. Stormtroopers, Zakus, Daleks, and Minions are some iconic non-video game examples.

Often a Series Mascot. Frequently, but not always, The Goomba. Sometimes the popularity of the Mascot Mook can result in spin-off titles (and other products) dedicated entirely to them; see Breakout Mook Character. See Recurring Element for non-monster examples.