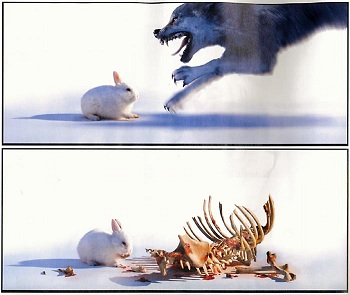 LOOK AT THE BONES!
"That's no ordinary rabbit! That's the foulest, cruel, and bad-tempered rodent you ever set eyes on!"
— Tim the Enchanter, Monty Python and the Holy Grail
Advertisement:

It's small. It's fluffy. It's adorable. But if you get on its bad side, your death will be swift and painful. Beware the cute ones.

Related to but distinct from Fluffy the Terrible, as well as being sort of a subtrope to Our Monsters Are Weird, the Killer Rabbit is any monster that's far more dangerous than it looks. Maybe it's strong for its size, poisonous on a massive level, has flesh-rending pointy bits that aren't readily apparent, or can just turn into something far more dangerous. Particularly devastating ones can even be Instakill Mooks. Either way, it can make a person wary of picking on small, defenseless animals, much like the Old Master can make a person more eager to respect their elders. In many cases, the creature isn't even all that harmful unless you actually mess with it, whether intentionally or not.

This trope takes its name from the "Dread Killer Rabbit of Caerbannog" in Monty Python and the Holy Grail, which seems to be a completely ordinary bunny rabbit, with the notably unusual ability to leap through the air at high speed and tear out people's throats.

This creature is also known as a "Vorpal Bunny", a name which comes from the monster of that name in the original Wizardry game from 1981, possibly inspired by the Monty Python movie and is named after "The Vorpal Blade", a fictional sword used to decapitate the title creature in the Lewis Carroll poem "Jabberwocky". The name also spread (via Dungeons & Dragons) to other games such as Quest for Glory and Ultima Online.

There's enough truth behind this that one of the first things many children are taught is "don't try to play with any animal until you know it's friendly." (Another lesson, learned later in life by many, sometimes too late, is: "Animals can become unfriendly pretty damn fast.")

Specific types of Killer Rabbits include Evil Girl Scouts and Ridiculously Cute Critters that are secretly evil. Civilizations that are more dangerous than they look are Superweapon Surprises. Killer Rabbits are the most notable subversion of What Measure Is a Non-Cute?, which is pervasive enough for everyone to assume that cute animals are friendly by default.

This trope is pervasive enough that if any of the Standard Fantasy Races in games seems to be cute and harmless, they would by definition have to be occasional Killer Rabbits to make them viable to play.

For cases where the Killer Rabbit is a literal rabbit, see Hair-Raising Hare.

Psycho Poodle is another subtrope of this.

If it has a scary name, but not a scary demeanor (such as Tasmanian devils), it's Deathbringer the Adorable. If it's scary-looking but innocent, it might be a Cute Monster.

Contrast Paper Tiger, which looks menacing but is virtually harmless.

Not to be confused with Kill da Wabbit.