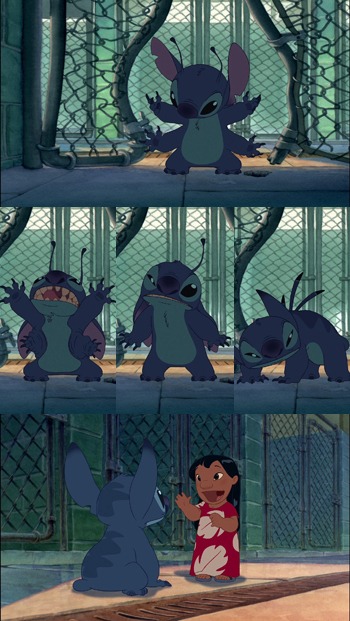 Exactly What It Says on the Tin. This trope describes one's ability to retract their limbs.

This is an ability common to creatures that possess a protective shell, which can retract their limbs within it as a natural mean of self-defense. Features such as retractable claws or teeth are also quite common, although for a more offensive use. More rarely, some creatures will be able to retract their legs or arms inside their body itself; in that case, it will most often be a case of either having Bizarre Alien Biology or being an Eldritch Abomination.

Aside from those uses, Retractable Appendages can also serve the purpose of camouflage, whether for the purpose of avoiding Fantastic Racism or as a way of Dressing as the Enemy. Most common examples include the fangs of vampires, the horns and wings of demonic beings, the abnormal features of mutants, and the extra limbs of human-looking aliens. When Played for Laughs, expect Power Incontinence to strike, with the character revealing their hidden appendages at the worst possible times, and trying desperately to hide them.

This trope is actually often found in Real Life. Among the most well-known examples are turtles and snails, which are able to retract their limbs within their shellsnote Although in reality, some species of turtles are only able to retract their neck, and some are even unable to retract at all., with the latter also able to retract their eyes and horns inside their body. On the same note, felines, especially cats, are known for their retractable claws. As such, if a fictional creature is based on one of these animals, they will most likely inherit this ability.

Your mileage may vary on whether this ability is to be considered Nightmare Fuel or Extremely Awesome when applied to human beings.

Stitch who is an alien, retracts his extra limbs so he can disguise himself as a dog.

Stitch who is an alien, retracts his extra limbs so he can disguise himself as a dog.